Are you a start-up? Does your solution support innovation in the agricultural sector? It enables to develop more sustainable models, more respectful for people and the environment?

Arnaud Monnier, Alexandre Bocage, Hervé Escriou and others are enlisted in the challenge

The Hauts-de-France region stands out for its highly developed, productive and diversified agriculture. Its natural assets made this region an agricultural champion very early on in its history, with numerous productions that have gradually developed into strong and competitive sectors.

6 million people live in the 3,800 municipalities of the Hauts-de-France. They constitute an important direct consumption basin for agriculture, which is also very much geared towards processing (beet sugar, milk, vegetables, potatoes, etc.) and exports (cereals in particular) because of a production largely in excess of needs.

While it is easy to remember that agriculture in the Hauts-de-France is focused on field crops, it is less well known that 10% of French milk comes from the region.

In total, more than two thirds of the region's territory is used for agriculture (2.1 million hectares of land) and contributes to the employment of 110,000 women and men.

Regional agriculture relies on the high skills and technical level of farmers. The education network is dense and recognised: 62 public or private agricultural education establishments cover the territory. Farmers are supported by a major technical network for research, experimentation, transfer and advice, in conjunction with several competitiveness clusters.

The region also has a dense and multipolar infrastructure network (road, rail, waterways, port facilities). The regional agro-food industry is strong and well-established, with the presence of large groups including Bonduelle, Téreos, Roquette, Mc Cain, Lactalis and Nestlé. Numerous SMEs and VSEs complete the sector and contribute to the great variety of trades and products. The fishing industry is well developed around Boulogne-sur-Mer, the leading French fishing port with a key position on the international market for fishing and seafood products. 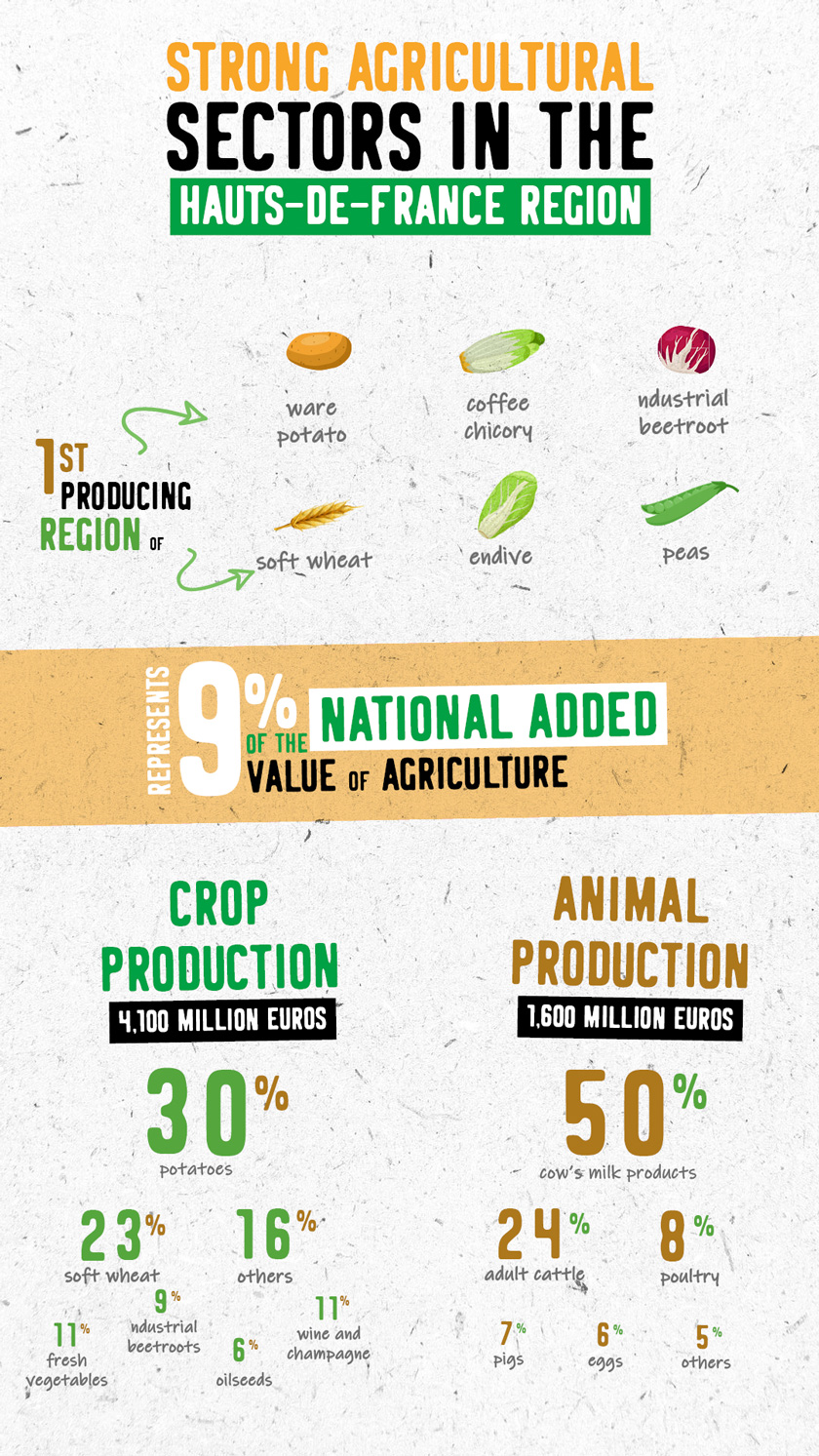 Over the last 30 years, the Hauts-de-France region has seen a 50% drop in the number of farms. However, this decline has resulted in an increase in the average surface area of the farms, which now stands at 84 hectares.

Production and consumption patterns are also adapting to meet consumer demand. Today, more than 38,000 hectares are cultivated organically and nearly 16% of farms sell their products through short delivery channels. More and more farmers are also becoming producers of green energy.